MIAMI (AP) - Max Mayfield and his team of hurricane forecasters were poised to downgrade Hurricane Michelle to a tropical storm when they got the call from a ham radio operator. 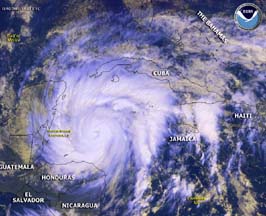 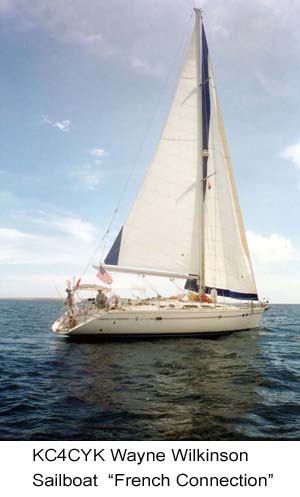 Michelle had already killed 17 people as it blasted through Cuba, Honduras, Nicaragua and Jamaica. With the Bahamas in its path, forecasters had to decide whether to believe the satellite or the ham radio.

They chose the report from the ham radio, scrapping plans to downgrade Michelle and keeping Hurricane warnings for the Bahamas. Parts of the island grouping took a direct hit from the storm.

"The surface winds from the ham report really helped us immensely," said Mayfield, director of the National Hurricane Center in Miami.

Despite sophisticated technology that has made hurricane forecasting more accurate, ham radio operators remain a critical component, sometimes providing more reliable information than satellites and hurricane hunter aircraft to forecasters whose job it is to track the storms and warn people out of harm's way.

During the Atlantic hurricane season, radio operators in the United States, the Caribbean and Latin America team up to provide data to forecasters. And when the power is out, ham radio operators with battery power or electric generators are sometimes the only source of information from a storm-stricken region. 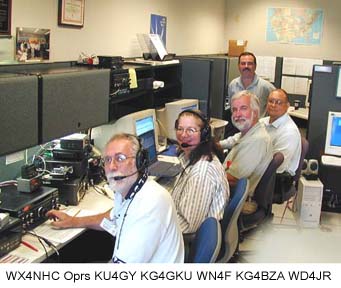 McHugh helps organize a group of 40 ham volunteers in Miami who are activated yearly on June 1 for the start of the Atlantic hurricane season.

When a storm is 300 miles away from any land, they come in three-hour shifts to the center and field reports from other dedicated amateur radio hounds on reserved long-range radio frequencies. Ham operators transmit and receive valuable hurricane data such as wind speeds, pressure and rain amounts.

The data bounces to Miami, where it is digested by forecasters.

Surface information ahead of a storm leads to the most accurate predictions for where a hurricane is going and how strong it is. Ground data from ham radio operators reporting from the middle of the storm can verify maximum winds and pressure readings. After a hurricane, amateur radio provides damage reports and rain totals. 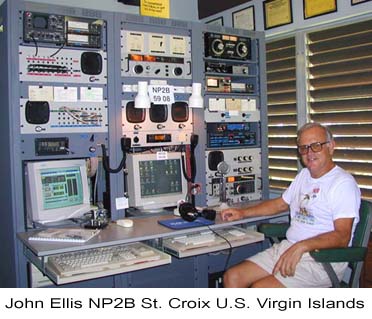 From his "fort-like" home in St. Croix in the U.S. Virgin Islands, John Ellis has an elaborate setup complete with transceivers, antennas and weather gauges he uses to measure weather conditions and communicate with the hurricane center.

Ellis, 59, has been through major hurricanes Hugo in 1989 and Georges in 1998, along with several other hurricanes and tropical storms. He's been in amateur radio for 48 years, starting off by helping civil defense officials track tornadoes in Johnson County, Kansas.

Many ham operators, like Ellis, can transmit when power and telephones don't work by using portable electric generators. Ellis has antennas that can lie flat on the ground outside - allowing him to transmit in the face of a hurricane's strong winds.

"The thrust is to give the hurricane center as much notice as possible so they can get their warnings out as accurately as possible," Ellis said in a telephone interview.

He and his wife have a set routine he describes as automatic - put up shutters, gas up the car, bring in the lawn furniture and ride out the storm. They can file reports with the hurricane center or relay reports from other ham operators.

"The house is very unpleasant when all the shutters go up," Ellis said. "It's dark and it's dreary and not a fun place to be in. It's a fort."

Ellis said the arrival of e-mail and the Internet in the 1990s has kept ham operators relevant to hurricane forecasting. The World Wide Web and 24-hour cable news stations have heightened the need for instant news, putting the onus on amateur radio for real-time reports when the power is usually out.

"During those first few hours, the ham radio is as important as it ever was, perhaps a little bit more so because of the need for news and the expectation of knowing what's going on right now," Ellis said. 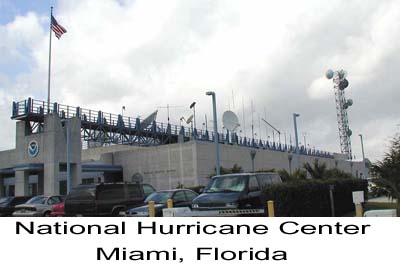 The $20,000 setup at the hurricane center includes not only radios but also computers and fax machines that get data to forecasters. Most of the equipment is donated.

Hams are keeping up with technology in several ways. An instant Internet-based method of reporting hurricane data [ON-NHC] is being used by 200 to 300 people who don't own ham radios but live within 50 miles of the U.S. coast, have working weather stations in their homes and want to help the center's hurricane coverage.

They just fill out a form and e-mail it to the volunteers at the center.

Another program [CWOP] allows the National Weather Service to get instant year-round feeds from hundreds of computers connected to home weather stations which automatically communicate wind speed and direction, temperature and pressure every 15 minutes.

But it's during hurricane season when hams and other reporters of weather data are most prized by Mayfield and hurricane specialists.

"We're the ones who are actually there, in the middle of it," Ellis said.