Amid the high-tech computers, satellite dishes and sophisticated equipment at the National Hurricane Center is a HAM radio operator station, somewhat hidden in a back office.

It might seem like it's akin to placing a teletype on a space shuttle. But when hurricanes form, the amateur radio station cranks up and receives weather information from HAM operators in the affected areas. Their observations help the forecasters in Miami-Dade County better judge a storm's strength or position and issue more precise warnings.

"The goal of our station basically is to help save lives," said Julio Ripoll, assistant coordinator of the hurricane center's Amateur Radio Station. "We give hurricane forecasters eyewitness reports and data they probably wouldn't otherwise have."

For instance, in November 2001, as Hurricane Michelle was approaching the Bahamas, the hurricane center thought the system was weakening. But a HAM operator on a sailboat in the Bahamas reported the storm was still generating winds up to 110 mph.

"It was just in time," Ripoll said. "The Bahamas were about to lower their hurricane warnings, and it was still technically a hurricane."

The station, known in the HAM operator world as WX4NHC, is staffed by 30 volunteers who swing into action whenever a storm is about 300 miles from hitting the U.S. coast or land in the Caribbean. They have worked more than a 100 hurricanes in the past three decades.

They'll work in three-hour shifts around the clock, receiving real-time weather observations from other HAM operators, who might be thousands of miles away or down the block.

"We sample so little of the storm's circulation, so any additional observation helps our analysis of what's going on now," he said.

In September 1998, when Hurricane Georges was aiming toward eastern Cuba, hurricane center forecasters were unsure of the exact location of the eye  because the Cuban government wouldn't allow U.S. hurricane hunter aircraft to fly into its airspace.

Hurricane specialist Lixion Avila asked the center's HAM station to reach out to Cuban radio operators. Ripoll found a HAM operator on the eastern most point of the island.

"The HAM operator was yelling over the microphone, and you could hear his excitement and the wind in the background," Ripoll said. "He explained that he was standing on this chair with about 2 feet of water in his house."

Ultimately, the operator gave Ripoll the direction of the wind, which helped Avila determine the location of the eye, a critical piece of information needed to develop an accurate track forecast.

Ripoll, a Miami architect, set up the HAM radio station at the hurricane center 33 years ago, when it was located in Coral Gables. He was asked to do so by former center director Neil Frank, who wanted a backup way to alert the Caribbean.

Ripoll, then head of the University of Miami amateur radio club, carted over his own personal radio in a cardboard box, full of wires. Today, the station has six permanent radios worth about $20,000, all donated by corporations.

John McHugh, coordinator of the hurricane center's station, said amateur radio can provide communications even when electricity is out because operators are trained to use generators and batteries to keep their radios on.

He said the hurricane center station operates with HF, or high frequency waves, for long-distance communications, and with VHF and UHF to communicate with local emergency managers and other government officials.

HAM operators have provided critical communications in the aftermath of storms, directing recovery agencies, such as the Salvation Army, where to distribute food and emergency supplies. Hurricane center HAMs also helped victims of the 2010 earthquake in Haiti receive supplies.

Larry Lazar, president of the Wellington Radio Club, said hundreds of HAM operators in South Florida are ready to help out if a storm hits this region. They helped get hot meals to people left homeless after Hurricane Andrew in 1992. They also helped residents without power in the aftermath of Hurricanes Frances and Jeanne, which hit the Treasure Coast in 2004. 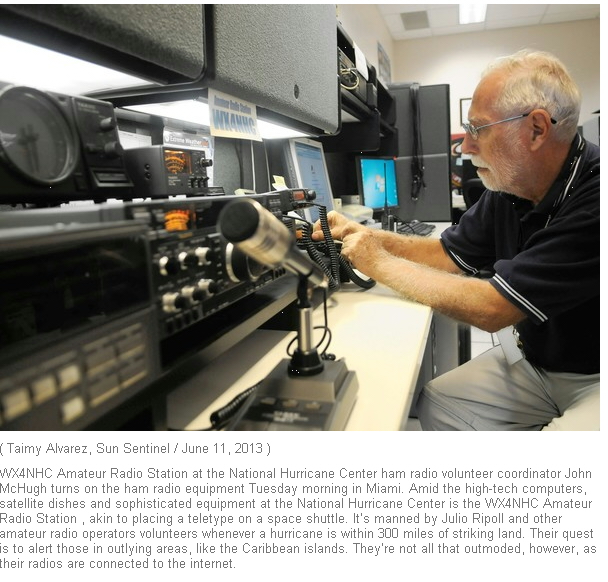