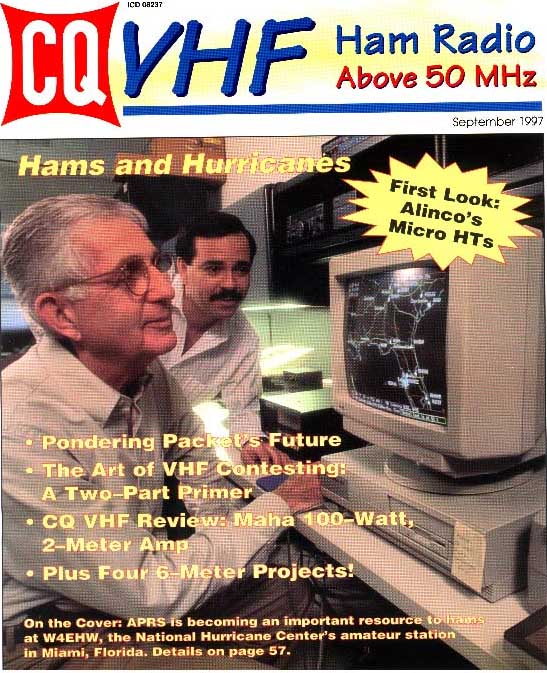 "If you're an amateur and wanted to put together a dream station, this is it." That's how Joe Schmidt, W4NKJ (on left photo) describes W4EHW, the ham station at the National Hurricane Center in Miami, Florida. Joe is the center's Volunteer Coordinator (although, by the time you read this, he'll have moved to Vermont, where hurricanes are less of a problem than in south Florida!).

In the photo, he's joined by Julio Ripoll, WD4R, who's in charge of scheduling the volunteers to keep the station on the air when hurricanes threaten. In 1996, Joe says, ham volunteers put in more than 300 hours at W4EHW.

The station is located in the center's computer room, and includes operations on HF, 2-meter FM and SSB, and 440 FM, plus the APRS (Automatic Position Reporting System) unit shown in the photo. Schmidt says that W4EHW has become a leader in encouraging more amateurs to Invest in weather instruments for increased accuracy in reporting conditions and has been in the forefront of using APRS to collect weather data. "We have 10 to 12 stations between Key West and Palm Beach that we can see," says Schmidt, "and they automatically update their information every five minutes."

Schmidt says hams on VHF throughout any hurricane area are very important in gathering data that is then fed into the HF hurricane nets (such as the Hurricane Watch Net on 14.235 MHz) and relayed to the hurricane center.

The VHF gear at the center, Joe says, is used to keep in touch with local emergency management officials. "If another major storm [like Hurricane Andrew] hits," says Schmidt, "the center wants to be able to talk to EOCs [Emergency Operating Centers] in Dade County, Naples [on the Gulf coast] and in the Keys." Noting that W4EHW is located in a very secure area of the hurricane center, Schmidt says "it's a compliment to amateur radio that they allow us to do this," adding that "I don't know of any other place in the country where amateur radio has an ongoing relationship of this nature with a government agency."