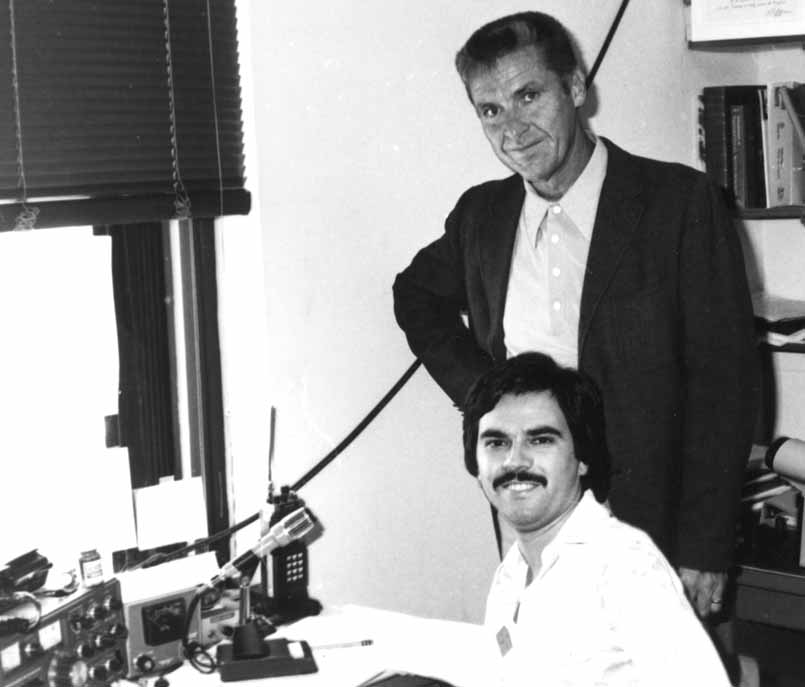 The radio equipment consisted of a Yaesu FT101EX and Inverted Vee wire antenna, Standard HT for VHF,
a Heath Kit SWR meter and bottle of aspirin (on top of radio).

This picture was taken in 1980 after completion of the operations for Hurricane Allen which devastated several Caribbean Islands, specially
the Island of St. Lucia and then hit the Gulf Coast of Texas.   Our primary objective at that time was to dispatch the current Hurricane Bulletins to
the affected areas and provide Emergency Backup Communications for the Hurricane Center when needed.

During Hurricane Allen, 1980,  Dr. Frank and Dr. Joseph Pelissier used our Amateur radio HF Station to communicate directly
to the Brownsville Weather Center in Texas after they had lost all of their conventional communications links.
The only remaining communications link between the Hurricane Center and Brownsville was their amateur radio station on battery power and wire antenna.
NHC and Brownsville discussed the strange behavior of the eye of Hurricane Allen while it stalled just off the Texas Coast for almost 2 hours.
W4EHW also provided very important radio relays and coordination between the American Red Cross, the British Hospital Ship HMS Glasgow and the
Government of St. Lucia just after the Hurricane severely damaged the island and caused fatalities and injuries to its people. Since no other means of
communications from St. Lucia were operating at the time, the HMS Glasgow sought and received permission to land on the island
the render medical aid via Amateur Radio.

This Radiogram message was sent on the air via Amateur Radio from Dr. Frank after Hurricane Allen 1980
and was printed on the front page of Florida Skip Publication, Sept. 1980:

"ATTENTION ALL HAMS WHO WORKED DURING HURRICANE ALLEN:
Thanks for a great job. Without your help many people in the islands
would not have received our warnings.
We look forward to working with you during future hurricanes.
73 Dr. Neil Frank, Director National Hurricane Center"