This conference, conducted each year at the Hurricane Center, promotes learning more about Hurricanes, emergency communications, recognition of past season accomplishments and personal interaction between members of the many organizations that participate together during hurricanes, said Julio Ripoll WD4R, NHC Asst. Amateur Radio Coordinator. “The presentations, post season analysis and discussions are very helpful in preparing for the coming hurricane season”.

W4EHW at NHC, gathers real-time weather reports from stations directly in the path of, or near a hurricane.  This vital data is then relayed to the Hurricane Forecasters. Even though scientific data is being gathered by satellites, Air reconnaissance and sometimes radar, these “Surface Reports” are very important, helping forecasters understand what is actually happening at ground level. Many times Ham Radio data fills in gaps where no other data was available at that time.  The descriptions from stations in the affected areas also provide a human dimension to otherwise abstract numbers. 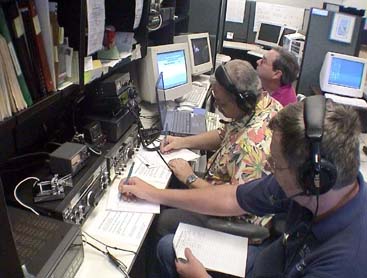 This past 2002 Atlantic Hurricane Season, the W4EHW Station was on-the-air for over 140 hours and collected over 300 reports. Sometimes operating in 2 and 3 manned shifts in order to handle the flow of information collected on the HWN 20 meter net, various Caribbean 40 meter nets and for the first time this year, the IRLP VHF/UHF Repeater network.  This past season made extensive use of our bilingual operators due to the locations of Hurricane’s Lili and Isidore over Cuba and the Yucatan Peninsula.

The conference began with a continental breakfast, sponsored by the Dade Radio Club and continued with colorful multi-media presentations. Each attendee received a complimentary conference CD Rom that included the W4EHW Book, Videos, and collection of hurricane guides and software.

John McHugh KU4GY, NHC Amateur Radio Coordinator welcomed the participants and reported on the progress and future objectives of the Caribbean Amateur Radio Meteorological Emergency Network The CARMEN Project aims to increase the quantity and quality of measured weather reports from the Caribbean Islands and Central America by the donating and installing weather measuring equipment to qualifying Amateur Radio Stations in selected areas, McHugh said.   John also described the National Oceanic and Atmospheric Administration’s CWOP (Citizen’s Weather Observers Program), which is sponsored by and uses automatic weather data from APRS stations and non-amateur weather enthusiasts via the Internet.

The famous W4EHW  “In Action Hurricane Video,” which had been updated with some of action from this past season made a big impression, even for the veteran operators, Julio reports..

The Hurricane Watch Net was well presented by Mike Pilgrim K5MP, the new Net Manager.  Mike explained how the many HWN Net Control Stations are located in many different parts of the country to accommodate propagation changes during a hurricane.  These Net Control Stations ensure that the stations in the affected area are being heard and their information can be relayed to NHC. 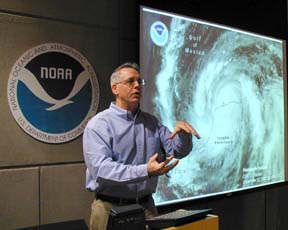 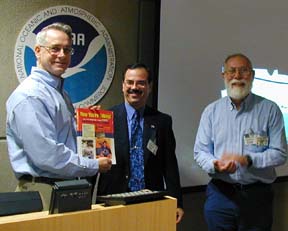 NHC Hurricane Specialist, Stacy Stewart, gave a detailed review of the 2002 hurricane season describing how the accuracy of computer models has been improving through the years the new 5 day forecasts to be implemented this coming season.  Stacy also described how Surface Reports, collected via Ham Radio, are used by forecasters to augment their advisories.  Stacy expressed his interest in becoming a Ham Radio operator and was presented with the ARRL “Now You’re talking” License Book by the W4EHW Group. 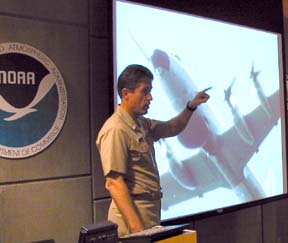 A very special presentation was made by Captain David Tennesen NL7MT, of NOAA’s Aircraft Operations Center’s “Hurricane Hunters”. Dave explained in detail the aircraft used by NOAA and the risky aspects of piloting his WP-3 Orion airplane, nicknamed “Miss Piggy” through a hurricane.   “After years of flying through hurricanes, I have become a connoisseur of turbulence” he said.  Conferees were all mesmerized by the incredible pictures he had taken during passes through the eye of several hurricanes.  His cockpit pictures showed G-Force meter readings of -.5 G to +3.5 Gs!

On-going radio tests between W4EHW and the Hurricane Hunters have been very important and purposeful, Capt. Tennesen explained. “Ham Radio serves a vital backup link to NHC, if other means of communications fail.”  He said, “I know that if we have a major problem and I make a distress call on our HF Ham Radio, as many as fifty people may hear our coordinates.”  This is why one of the two HF radio on board is dedicated to Ham Radio.

Conferees noted a very special announcement, as National Hurricane Center’s Amateur Radio Station, W4EHW, celebrated its 23rd year of continuous service. John McHugh reported a decision, to retire the W4EHW call sign.  “Effective June 1st, 2003 we will start using WX4NHC in compliance with the trend of weather- related stations using the WX prefix. We believe this will give us better on-the-air recognition, as WX is understood to mean Weather and NHC in well known for National Hurricane Center”. 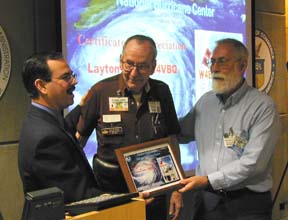 Layton Ruse W4VBQ
For his many years of dedicated service as a W4EHW operator and past Coordinator. 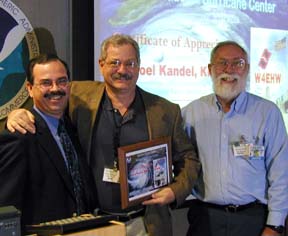 Joel Kandel KI4T
For helping co-found this station 23 years ago and the many years of support and guidance with operations. 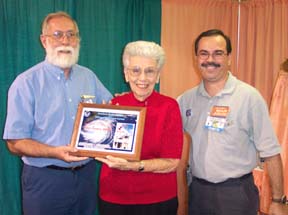 Evelyn Gauzens W4WYR
From the beginning of Amateur Radio at NHC, Evelyn has been there with her support, both locally and at the ARRL National level. 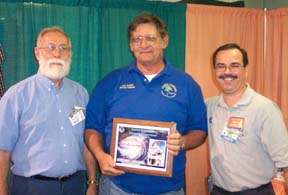 Carl Jageilski KA4HLO, for his continuing support from the Miami-Dade Emergency Management Department and ARPSC. 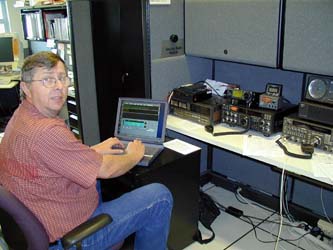 Two of our most active operators are leaving us this year. We will miss the early morning opening of the station by David Hall KA4MNX. 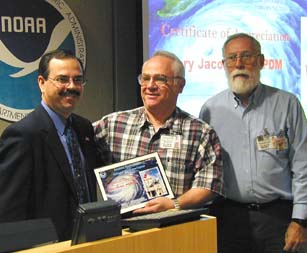 And the late night show by Gary Jacobs WA4PDM, who is also one of our Lock-down operator teams along with his wife Phyllis Jacobs WB4VRV. 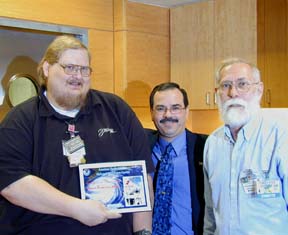 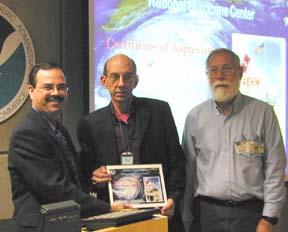 Cuba has been hit by more Hurricanes in the last two years than we can remember. Lionel Remigio KC4CLD has been very helpful in relaying to us the surface reports from 40 and 80 meters nets.  His reports are the most detailed that we have seen. 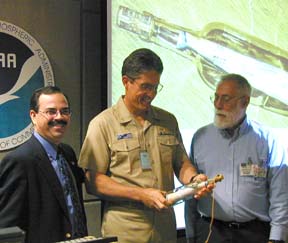 “Something has become a tradition at W4EHW, our  “Emergency Device of Last Resort”, joked Julio Ripoll.  Called the  “Weather In A Bottle Award, ” it is used when all else fails. “This year’s recipient, Capt. David Tennesen NL7MT, has conducted so many radio tests on so many frequencies with us, we think he may want to try this method once from the “Hurricane Hunter”..

The conference was followed by a tour of the Hurricane Center and W4EHW Radio Room.

For more information, please visit our web site at www.wx4nhc.org